Amsterdam, or more specifically Noordwijk, played host to this years ADE (Apple Distinguished Educator) Instiute which welcomed the amazing Class of 2015 to the programme. As in Cork 2013, the best thing about institute is the opportunity to meet like-minded, dedicated educators from across the planet. Of course, Apple provide the opportunity for all attendees to learn a lot about their awesome products and how best we can use them in the classroom but I also learned (or had confirmed) a few other things that I would like to share:

I work in a school that only had WiFi installed in January this year. Although a roller coaster ride, the thrills and spills were worth it as we are initiating our inaugural 1:2:1 programme THIS September! The details of our journey can be seen in this short film: However, what the movie does not show is the feeling of isolation suffered at various points on our journey. People who don’t get educational technology often look on it (and the people that purvey its benefits)  with cynicism and scepticism.   However, at the ADE institute, every single attendee, ‘get’s’ technology in the classroom. They have seen first hand the difference it can make and help me to realise that I am not a lone-madman hell-bent on a irrational desire to force technology upon schools who ‘don’t do things that way’.

One of the greatest aspects of the ADE institute 2015 was the daily round of ADE showcases. ADE’s from all over the World had three-minutes to tell their stories. The school locations, age-ranges, demographics etc. varied wildly but what every story shared was clear and compelling evidence of the difference schools and teachers who embrace technology were making to the lives of their students.

3 – Tech is a tool – it’s teachers that really matter

Great teachers have existed since the dawn of humanity whilst arguably, decent technology in schools is still in it’s infancy. Part of being a great teacher is the ability to adapt your practice and embrace change when it enhances learning. There is NO doubt that technology has changed the potential in and outside the classroom (ask any ADE). However, without proactive and creative teachers forging new ways of using the technology, progress and change would be impossible.

4 – iTunesU Course is getting better

I’ve used iTunes U Course manager a few times, but with shared devices I was unable to utilise it’s full potential. Clearly, with a 1:2:1 project I am already looking forward to harnessing the huge power of the fantastic classroom tool. However, I attended a session where the fantastic new features were shared and we can now enjoy:

Essentially, this means that iTunesU can now replace Edmodo, Showbie and the like as your complete digital learning environment. However, this is only possible in an iPad 1:2:1 setting and not forgetting a considerable amount of staff training. I’ll be pushing out my first course in September – if you are facing in the right direction, all you have to do is start walking…

Nathan Ashman and I enjoy an early morning run

I love running. There is NO better way of getting to know a new place than pulling on your running gear and setting off into the unknown for an explore. I had looked on a map and noticed that we were near a beach but it wasn’t until @coby_mr ran it, that I realised how close it was. Then, during a conversation with @vickiebacondpc, she mentioned another avid runner in attendance – @nathanashman. He told me about the extraordinary 96 mile run he has planned in the next few weeks and we promptly arranged a 5:50am, 9 mile run to the Dutch dunes. It was one of the highlights of the week. The run was brilliant; we even saw a deer and sand-rabbits and although our bromance was short-lived, our conversation will live long in the memory.

The conversations above involved real people. However, I have deliberately referenced their Twitter handles as connected teachers NEED to be on Twitter. I didn’t meet one ADE who was not on the influential social media and when we began work with our communities (like-minded professionals), we all instantly exchanged Twitter handles and have used it as a forum of discussion and collaboration ever since. The collaboration within our groups was truly first class: problems were aired to the table and solutions found within seconds. Imagine every staffroom being that productive. My brilliant group consisted of these fabulous educators, all of whom are well-worth a follow – @BrianEHarkins @cleyman @cordym @coby_mr @MvandeVrie @Lordlukey @fusion_ed @nielswijnhoud  However, global connectivity is not simply limited to twitter, it is with great excitement that I am now looking forward to sharing content on the brilliant iPad Educators site founded and run by the inspirational ADE, Steve Bambury (@steve_bambury).

Another highlight was the live demonstration of Final Cut Pro and Logic Pro by two Apple employees, who basically designed them. It was mind blowing. They started with a few pictures and video clips and then, live on stage, cut between the two programmes to produce a stunning short clip, complete with self-composed sound track and 3D titles. Very cool and an idea of how (relatively) simple it has become for students to produce high quality productions if they have the necessary tools.

8 – Profile Manager is getting better

As mentioned before, we roll out a 1:2:1 iPad project across Year Six in September. This is a big deal for any school and we want it to work. We have installed a significant amount of trust in our resellers, Solutions INC from Brighton, and they have recommended we use the Lightspeed MDM version as the original Profile Manager would not be fit for our needs. We have used Profile Manager with our shared devices and it has been OK. However, the session on the Profile Manager updates suggested that Apple were increasingly aware of the drawbacks and were making forward thinking changes that will enable it to be more trustworthy in a 1:2:1 setting. However, I`m going to wait until I hear feedback from other schools before suggesting any form of change…

9 – Photography really is an art 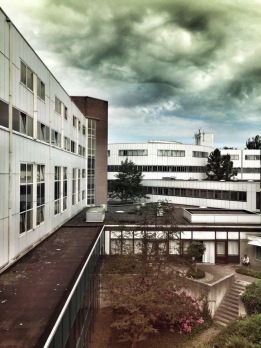 Another highlight of the week was the session by Bill Frakes, a Pulitzer-Prize winning photographer and general fascinating bloke. His photography is stunning and he showed a film that showcased his talents and his focus on the sky. It really was a breathtaking session and reiterated the talent required to spot everyday occurrences, moments in life, and turn them into extraordinary art. After the session, @gavinsmart emulated Frakes with this great shot which, unbeknown to me, featured myself calling home. I did attempt to emulate Frakes myself when I got to the beach after a run, however my work resembled a photograph taken by 5 year old learning how to use a camera for the first time. In fact, that’s probably a disservice to 5 year olds but did re-iterate the talent photographers have.

10 – Every Teacher has a story

People. The abiding memory of the ADE Institute 2015 in Amsterdam is people. From the initial shuttle bus to our hotel, right until my train journey back to London Victoria, conversation was flowing about the fascinating, absorbing and compelling world of education. Meeting so many great educators was a real privilege and listening to each respective story reiterated what a wonderful job we all do. Living during a time of international tension and conflict, it was so refreshing to meet people from every corner of the planet, each with a common goal and a unique story to share.